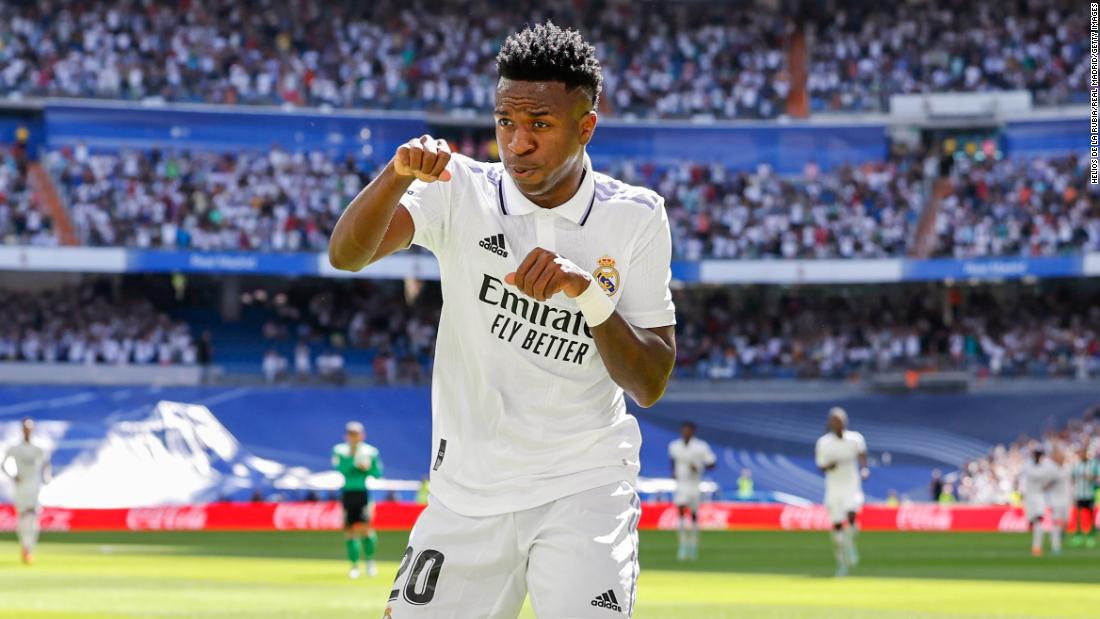 During an appearance on Spanish television on Friday, Pedro Bravo – a top agent and president of the Association of Spanish Agents – compared Vinicius Jr’s dancing celebrations after scoring to the behavior of a monkey, arguing that the striker didn’t respect his opponents and “should stop playing monkey.”

“When you score against a rival, if you want to dance the samba, you go to the sambadrome in Brazil, here what you have to do is respect your colleagues and stop playing monkey,” he said.

Bravo has been accused of using racist language by numerous people on social media and has since apologized on Twitterexplaining that he had abused a metaphor.

But in a video posted to Vinicius Jr’s social media on September 16, the Brazil international responded to the criticism and said he wouldn’t stop dancing.

“‘As long as the color of the skin is more important than the brightness of the eyes, there will be war.'” I have this phrase tattooed on my body, “said Vinicius Jr in his Instagram post.

“This thought is permanent in my head. It is the attitude and the philosophy that I try to practice in my life. They say that happiness disturbs. The happiness of a black Brazilian who succeeds in Europe disturbs much more!

“But my desire to win, my smile and the sparkle in my eyes is bigger than all that. You can’t even imagine. I have been the victim of xenophobia and racism in one statement. But none of that only started yesterday.”

The 22-year-old named other players who also danced in celebration after scoring. He added: “Weeks ago they started criminalizing my dances. Dances that are not mine. They belong to Ronaldinho, Neymar, (Lucas) Paquetá, (Antoine) Griezmann, João Félix, Matheus Cunha …they belong to Brazilian funk and samba artists, reggaeton singers and black Americans.

“These are dances to celebrate the cultural diversity of the world. Accept it, respect it. I’m not going to stop.

“The script always ends with apologies and ‘I’ve been misunderstood’, but I repeat, racist: I won’t stop dancing. Whether it’s at the Sambadrome, the Bernabéu or elsewhere.”

In his apology on Twitter, Bravo said: “I want to clarify that the phrase ‘playing the monkey’ which I misused to describe Vinicius’ goal celebration dance was used metaphorically (‘playing the fool’) Since my intention was not to offend anyone, I sincerely apologize, I’m sorry.”

Neither the Association of Spanish Agents nor Atresmedia, the broadcaster of the show where Bravo made its comments, immediately responded to CNN’s request for comment.

The agent’s comments came after Atlético Madrid player Koke Resurrección warned Vinicius not to dance if he scored in the Madrid derby on Sunday.

Speaking ahead of that match, Atlético boss Diego Simeone said: “We live in a society in which we are all involved. We are people and that is the society we have.”

The Brazil national team offered their support to Vinicius Jr. “There will be dancing, dribbling, but above all (there will be) respect,” he wrote on Twitter, accompanied by a video of Vinicius Jr and his international teammates, Neymar and Lucas Paquetá, dancing after a goal.

“Our athlete (Vinicius Jr) was the target of racist remarks this Thursday evening (15). CBF reinforces and stands in solidarity with #BailaViniJr.”

Real Madrid, for whom Vinicius Jr has had an excellent start to the season with five goals in eight appearances, said in a statement that the club would take “legal action against anyone who makes racist remarks towards our players”.

Vinicius Jr explained that he is working to ensure that future generations are better informed on these issues.

“I come from a country where poverty is very high, where people have no access to education and in many cases no food on the table,” he said.

“On and off the pitch, I have developed an app to help with the education of children in public schools without financial assistance from anyone. I am building a school in my name. I will do much more for education. I want the following generations to be ready, like me, to fight against racists and xenophobes.

“I always try to be a professional and an exemplary citizen. But that doesn’t get ‘clicks’, it’s not trendy on the internet, and it doesn’t motivate cowards to talk in a way either. aggression from people they don’t even know.”