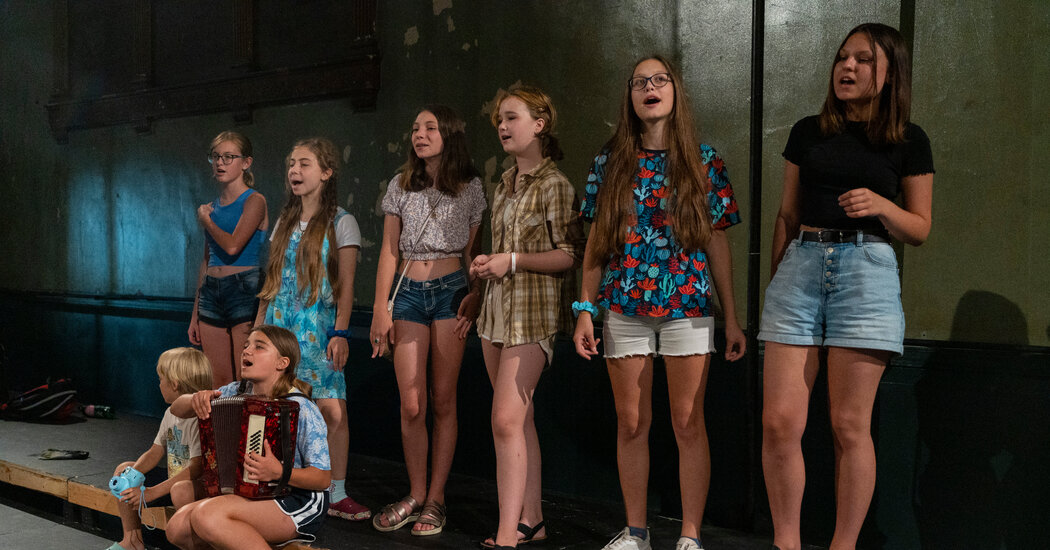 In a converted Sunday school space in Brooklyn’s Fort Greene neighborhood on Monday, eight children, newly arrived from Ukraine, gathered on a pair of risers and began singing.

Hanna Oneshchak, 12, on accordion, accompanied the other seven as they sang a Ukrainian folk song, “Ta nema toho Mykyty”, about a man who decides to leave the country to seek a better job, but looks then towards the mountains and, struck by their beauty, changes his mind.

“Whatever sorrow we have”, they sang in Ukrainian, “I will not go to American soil”.

The children, students of the Open-Minded Kids Studio theater school in Lviv, were rehearsing the song ahead of two weekend performances of the play ‘Mama Po Skaipu’ (‘Mom on Skype’) at the Irondale Center in Brooklyn. It will be the American premiere of the 80-minute show, presented on Saturday and Sunday evenings.

“We share our emotions with the Americans”, Anastasia Mysiuha, 14 years old, said in English. And, she added, she hopes viewers “will get a better understanding of what’s going on in Ukraine.”

The show, which will be presented in Ukrainian with English subtitles, is a series of seven monologues about family separation told from the perspective of children. Written by contemporary writers from Lviv, the true stories were inspired by the mass exodus from Ukraine in the 1990s after the fall of the Soviet Union. At that time, many men and women went to work in other countries in order to support their families back home.

“Mom on Skype” was first staged in a warehouse-turned-bomb shelter in Lviv, western Ukraine, in April, just two months after the Russian invasion began. There it was led by an art teacher turned Ukrainian active-duty soldier, Oleg Oneshchak, who is the father of two of the children in the play: Hanna and 7-year-old Oleksii. It was one of the few cultural events to take place in Ukraine. at this moment.

“A lot of people were crying when we did it in Ukraine,” said Khrystyna Hniedko, 14, one of the performers.

Now the kids, ages 7 to 14, are performing for audiences in Brooklyn this weekend.

The idea for the tour came about when Jim Niesen, artistic director of the Irondale Center, the man behind the non-profit theater company Irondale Ensemble Project, saw a Photo documentary in the New York Times at the end of April on the performance in Ukraine.

“I was so inspired by them,” Niesen said in a theater interview this week. “There was this horrible war going on, and there they were, doing a play.”

He and the theater’s executive director, Terry Greiss, tracked down Oneshchak on Facebook Messenger and came up with an idea: Would he and the kids consider bringing the show to Brooklyn?

Oneshchak, the kids, and their families were all excited, and Greiss and the Irondale team began fundraising to pay for travel and accommodation costs — the full bill for the month-long stay. for the eight children and their three attendants, who will also take them to Connecticut and Massachusetts, costs about $40,000, he said. (Oleg Oneshchak couldn’t make the trip, but his wife, Mariia Oneshchak, who is also an actress and educator in the theater program, did.)

The majority of the band’s meals have been donated, and many of them remain in the homes of Irondale board members and others. The offices of Sen. Chuck Schumer and Rep. Hakeem Jeffries also helped the group book visa appointments, which are difficult to obtain as many people attempt to leave Ukraine, before their July 22 arrival.

The generosity of other donors meant the trip’s itinerary quickly expanded to include a week-long performing arts summer camp in Connecticut, where children taught American campers three Ukrainian folk songs ; a trip to see “The Lion King” on Broadway; visits to the Guggenheim Museum and Coney Island; visiting the Russ & Daughters bagel factory; and a private tour of the Statue of Liberty.

When we spoke at Monday’s rehearsal, 12-year-old Valeriia Khozhempa said she was immediately struck by one thing: the lack of anti-aircraft sirens.

“It’s a very beautiful life,” she said. “In Ukraine there are so many air alarms.”

There was also a humorous attribute, Khrystyna said: American politeness. “People always say ‘Sorry’ and ‘Excuse me,'” she said. “It’s surprising because everyone is really polite.”

The children began working on the show in January before being forced to halt rehearsals when Russia invaded Ukraine. Even though the play was originally about stories from the 1990s, the families are once again separated because the men are fighting each other in the war. (Most Ukrainian men between the ages of 18 and 60 – of conscription age – are not allowed to leave the country.)

The theme of each of the show’s monologues is that parents fail to realize how detrimental their decisions, even financially prudent ones, can be to the happiness of their children. “Money can never compensate you for losing your connection to the people you love,” says a character in one of the stories, titled “Through the Eyes of Children.”

All the kids worry about whether the American audience will understand their message, because of the language barrier and the need to read the subtitles.

“I know it will be difficult,” Anastasia said. “But if they come, I hope they try to understand.”

All proceeds from this weekend’s shows — as well as performances in Hartford, Connecticut and Boston next week — will go towards a fighter jet the band hopes to help buy for the Ukrainian military. (A used jet costs about $1 million, Oleg Oneshchak said.)

Hanna Oneshchak, who sings a patriotic Ukrainian song she wrote, said she hopes audiences see not just the piece, but the underlying message about war that the performers embody.

“The world sees this as a movie,” she said. “I want them to remember us.”