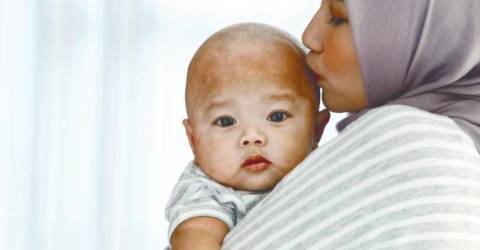 THE The most common food allergy in infants is cow’s milk protein allergy (CMPA). This occurs when an infant consumes or comes into contact with cow’s milk and its products. The child’s immune system reacts abnormally to cow’s milk protein and tries to neutralize the protein by releasing various chemicals that cause the symptoms of CMPA.

It is estimated to affect between 5 and 8% of infants worldwide. CMPA usually begins in the first few months of life, although they do not immediately develop symptoms during the first milk feeds. As a general rule, the majority of children outgrow CMPA where 50% outgrow it at the age of 1 to 2 years, 80% at 4 years and 90% at 6 years. However, certain groups of children, especially those with other allergic conditions including asthma, rhinitis or eczema, are at higher risk of developing persistent symptoms of CMPA.

Allergic reactions can be categorized into rapid onset which occurs within an hour of ingestion or delayed onset which takes hours to days to develop symptoms. Symptoms can affect various bodily systems, including the gastrointestinal, skin, and respiratory systems. Some of the typical symptoms are hives, swelling of the face and throat, cough or shortness of breath, wheezing and diarrhea. On rare occasions, anaphylaxis may occur, which is a medical emergency requiring immediate treatment.

CMPA is sometimes confused with lactose intolerance. However, lactose intolerance does not involve the immune system and usually manifests as bloating or diarrhea after consuming milk or foods containing lactose. Lactose intolerance occurs when the digestive system is unable to fully digest lactose. It is important to differentiate between the two because the treatment is different.

The diagnosis is mainly based on the history of symptoms and there are no specific tests. The gold standard for diagnosis is the oral food challenge, where if symptoms improve following the elimination of cow’s milk from the diet, the diagnosis is better supported. Sometimes certain allergy tests, including a skin test and a blood test to measure specific IgE antibodies, can be helpful.

If you suspect your child has CMPA, it’s best to see your doctor to confirm the diagnosis rather than immediately attempting to eliminate or replace cow’s milk in your child’s diet.

Once confirmed, the key principle of treatment for CMPA is the elimination of cow’s milk from the infant’s diet. Infants who can be fully breastfed and children over 2 years of age who no longer need formula may not need replacement formula.

Avoiding cow’s milk is not limited to the infant who only consumes milk. Exposure to cow’s milk can also occur through inhalation or contact and can also lead to the development of symptoms.

When searching for substitution formulas, several options are available. It is important to note that formulas made from goat’s milk are not recommended as a substitute due to the high risks of cross-reactivity where the infant may also have a reaction to the milk. Goat’s milk is also high in sodium and low in folic acid, increasing the risk of nutritional imbalances in infants.

If possible, it is best to continue full breastfeeding and stop giving formula to the infant. If this is not possible, the preferred option is to use an extensively hydrolyzed (EHF) formula. In EHF, cow’s milk protein is broken down into smaller peptides, making them less allergenic compared to whole cow’s milk protein. In severe cases, the use of an amino acid formula (AAF) is recommended where the protein chain is further broken down into single amino acids.

The disadvantage of using EHF and AAF is that they have a less palatable taste than normal infant formula. They are also more expensive and may not be as readily available.

EHF and AAF should not be confused with another type of formula available called partially hydrolyzed formula (PHF) which has a slightly shorter protein chain. PHF can still cause reactions to CMPA and is not recommended for the treatment of CMPA.

For infants over 6 months, a soy-based formula can sometimes be given instead. However, there have been some reports of cross-reactivity with soy formulas, and soy formulas are not recommended for premature babies and cannot be given to babies who have conditions such as galactosemia. .

Some studies, however, suggest that the risk of developing eczema may be lower in the group consuming the hydrolyzed formula. Overall, the use of hydrolyzed infant formula to prevent allergies cannot be advised with confidence.

Dr. Yeap is a Pediatrician attached to KPJ Sentosa KL. Through his articles, he aims to help increase public awareness of common issues associated with children’s health.