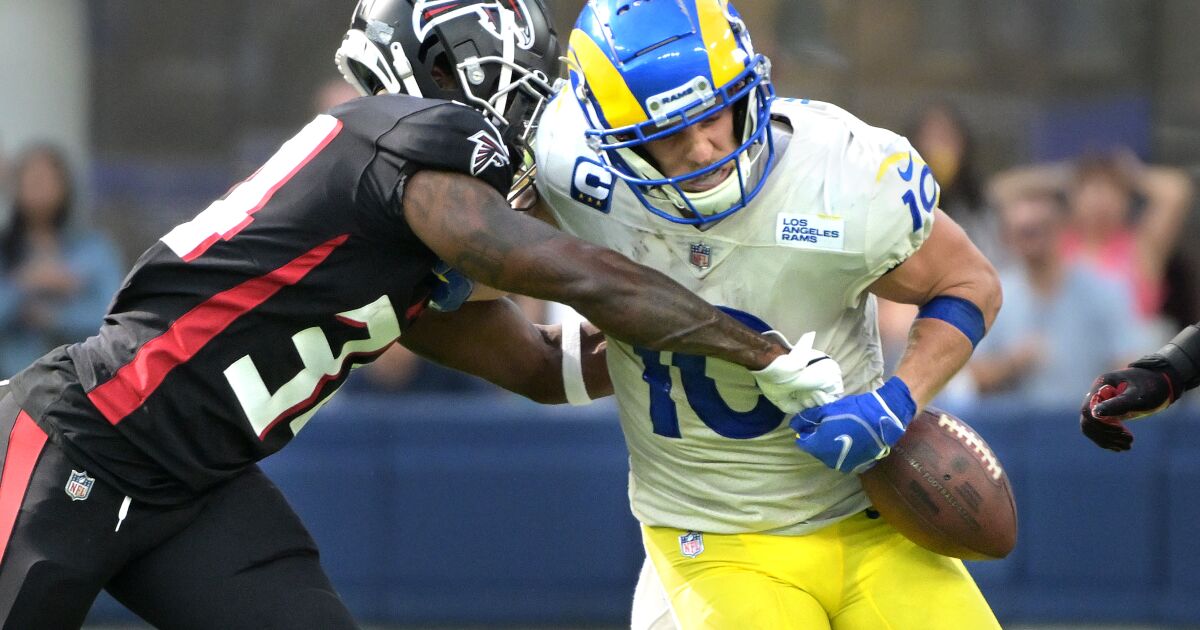 It shouldn’t have come down to a edgy, biting finish.

The defending Super Bowl champion bouquets had enough of a lead over the Atlanta Falcons late enough on Sunday to suggest they would easily even their record at 1-1 and bounce back strongly from being beaten by the Buffalo Bills in their season opener. Their offense was balanced and productive.

Their defense was solid. Quarterback Matthew Stafford intercepted two passes, but the Rams lived with 17 of them in their league season. They minimized the damage.

But what should have been a waltz for the Rams disintegrated into a breather ending in a 31-27 victory at SoFi Field. The Falcons outscored the Rams 24-10 in a sometimes chaotic second half, which ended with a sack by Atlanta quarterback Marcus Mariota at the Falcons 40-yard line.

“It was really interesting at the end,” said Stafford, able to smile even though the Rams shouldn’t have made it so dramatic.

After leading 28-3 in the third quarter and 31-10 with 12:13 left in the fourth quarter, the Rams came perilously close to getting into an 0-2 hole and joining the Baltimore Ravens, Las Raiders Vegas and the Cleveland Browns in blowing major runs and losing on Sunday. It’s a trend they didn’t need to follow.

“It was definitely closer than expected,” running back Cam Akers said. “We shouldn’t have been in this position. We have to finish better. This will be this week’s test in training.

As coach Sean McVay told his players in a typically heated postgame speech, the NFL doesn’t award style points. A win is a win is a win. There’s no asterisk in the standings to note that they nearly gave up the game or that the crowd of 71,802 seemed less than convinced the Rams are on track to repeat as champions.

“Can we clean all this? No doubt about it,” shouted McVay. “But never take for granted how difficult it is to win week after week.”

That’s the coach’s basic language, but he added an important point that might be the most important conclusion the Rams took from this game. “Don’t allow it to be anything other than a building block,” he said.

It’s easy to dwell on their near-collapse rather than what they did right. They need to clean up their turnovers. Hang on when they’re ahead. Don’t let an adversary escape his grasp. These are things champions do.

“It all comes down to the finish. If we do that, we’ll be where we want to be,” said Akers, who carried the ball 15 times for 44 yards and caught two passes for 18 yards. “Today obviously we didn’t finish the way we wanted, so we have to go back to the drawing board and work a bit.”

If they can take this game as a potential starting point for the strengths they showed on Sunday, it will end up looking like a better win than it looked in the later stages.

“I think it’s still early,” linebacker Bobby Wagner said. “I’ve been around long enough that you should get the wins as you get them. A lot of these things that happen can be easily fixed, and so that’s encouraging.

The patched offensive line, which allowed Buffalo to sack Stafford seven times in Game 1, protected Stafford well enough that he was only sacked once. Perhaps more importantly, the Rams have found new dimensions in their offense.

They led 14-3 before Stafford connected for the first time with Cooper Kupp, who finished with 11 receptions for 108 yards and two touchdowns.

They used Ben Skowronek as a fullback and targeted him three times and had Brandon Powell – usually a punt and kick returner – carry the ball once and catch it once.

And unlike last week, when they only targeted receiver Allen Robinson twice, the Rams involved him on the second play of their first possession with a pass that he turned into a win. 15 yards. He also caught the short pass that became their first touchdown, in the first quarter, and had an apparent touchdown called back because a medical timeout had been called before the snap. He caught four passes, the final reception being the 500th of his career.

Stafford said he was comfortable with Robinson from the start and blamed himself for not giving him the ball more often against Buffalo.

“He’s going to continue to grow in his role in this offense,” Stafford said. “We will continue to learn from each other.”

Robinson was happy with his involvement on Sunday.

“But it feels good. Like I said before, that’s the main focus – getting wins, being able to lock down, doing my part to the best of my abilities and being the best player I can be.

They weren’t at their best as a team on Sunday. But by widening their offense and hanging on to win, they gave themselves a chance to build from here. They can’t grope that.