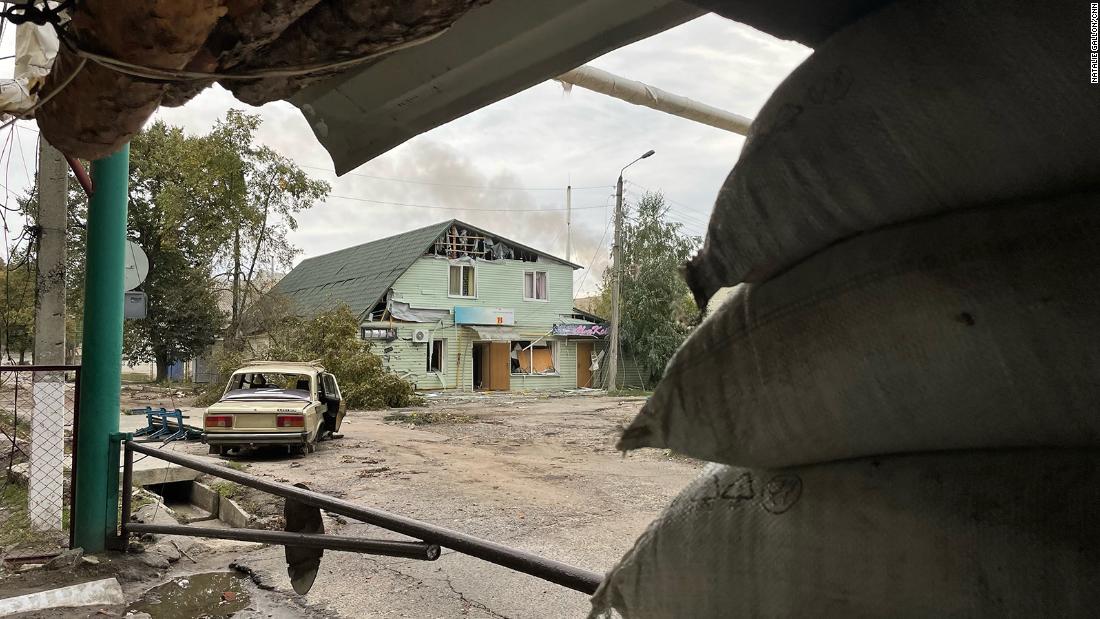 Intense damage is visible on almost all buildings. A huge billboard with the image of a waving Russian flag stands next to the bridge that crosses the Oskil River in the city center, bearing the words: “We are one people with Russia!

For now, the Ukrainian Army chased Russian forces across the bridge and appeared to be gaining momentum as it crossed the eastern banks of the river towards Lugansk, a key separatist territory controlled by Moscow. CNN saw Ukrainian infantry returning on foot from the east.

Yet inside this town, one of many in the eastern region of Kharkiv that have been liberated, are the telltale signs of a hellish occupation. A former police building was used as a sprawling detention center by the Russians, where up to 400 prisoners were held in its cramped, dark cells, with eight or nine prisoners per room, Ukrainian authorities told CNN . A brightly painted mural of a Russian soldier with a ‘Z’ on his armband standing next to an elderly woman waving the flag of the former Soviet empire can still be seen on one wall.

Before CNN was allowed in, a prisoner with his hands bound with bright blue duct tape was quickly led outside, placed in a vehicle and driven away.

This one may have been a Russian soldier, according to the Security Service of Ukraine (SBU), which believes he either deserted his troops or was left behind. The prisoner claimed to be a local, the SBU said.

Just outside the entrance to the building, two Russian flags tied to wooden poles were strewn on the ground, one bearing signs of being burned. Inside, rubbish littered the floors of the wet space. Across the narrow corridor were small rooms on either side, where the Russians used to keep their prisoners.

A few small mattresses and tables were seen in some of the small cells, others only contained a table and two chairs, remnants of what may have been an interrogation room.

Not all rooms had been cleared of possible explosives, officials told CNN. A grenade trap sat on a bench inside a cell, held in place by a half-eaten tin can.

As CNN drove through the center, an SBU officer noticed the trap and wrote, “Grenade!!!” on the wall outside the cell with a black marker and an arrow to indicate exactly which room the investigators should enter. The door was closed.

As investigations continue, Ukrainian officials are also uncovering other scars, such as those from alleged torture.

A former prisoner who was introduced to CNN by Ukraine’s security services said he was imprisoned in the building about a month ago. As I walked down the hall, I showed CNN the room where he said the Russians interrogated him.

“They put me in this chair,” said the former prisoner – whom CNN did not name for his safety – pointing. “There the investigator sat down, and there was the guy with the phone and another one who helped.”

The phone was an old wind-up model that he said was used to give him electric shocks. He believes his interrogator was experienced in this method from their time with the Russian security services, the FSB.

The occupiers asked him who he was in contact with in the Ukrainian army and told them that he had been a cook in the army, he said.

“They said to me, ‘You think you’re tough. Let’s find out how badly,” he said. “They also shot me with some kind of gun. Here and in the leg,” he told CNN, pointing to his chest and leg.

“They promised that I would only see the sun and the sky again if they forced me into a minefield,” he said. “The main thing is to survive and resist. It took me a week and a half to recover when I came out.”

The man is not alone in bearing the scars of a brutal invasion, detention and alleged torture.

As authorities continue to investigate and clean up liberated towns in the Kharkiv region, they are finding increasing evidence of detention centers and cells used for torture.

Ukrainian President Volodymyr Zelensky said on Saturday that “more than 10 torture chambers” used by occupation forces have so far been uncovered in the area. “As the occupiers fled, they also dropped the torture devices,” he said.

CNN contacted the Russian government for comment but did not receive a response.

Kupyansk may have been recently liberated, but the city is a ghost town, littered with destruction and debris.

The very few remaining inhabitants huddle in its empty shell.