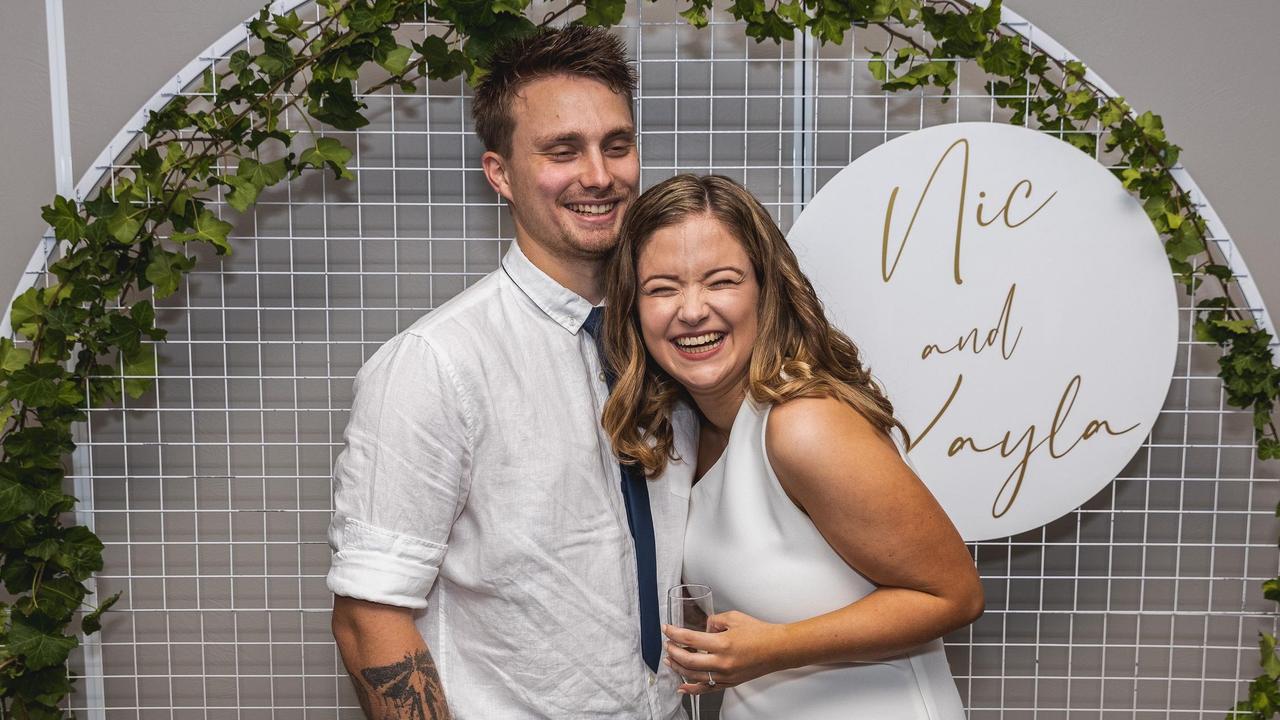 Kayla Newland was just 23 when she saw a doctor for pain around her vulva last November.

It took months before doctors realized her pain was a symptom of a cancer that only 420 Australian women are diagnosed with each year.

“I was just going about my life and everything was turned upside down for us,” she told NCA NewsWire.

This week, in particular, has been a whirlwind.

The 24-year-old is due to walk down the aisle on Saturday in a small ceremony in her grandfather’s backyard.

It will only be family and the bridal party on the intimate occasion as she weds her partner of five years, Nic Barville.

“We thought it would be nice to get married before my hair fell out and all that funny stuff,” she said.

It’s certainly not how they imagined their big day, but Ms Newland said a big wedding was no longer a priority after her diagnosis.

Nausea from the last cycle of chemotherapy – which she started this week – has been hitting her for a few days.

Her cancer is now stage 3 and considered non-curative, which means it is not behaving like a typical vulvar cancer should. It started spreading to her lungs and hips.

Doctors at King Edward Memorial Hospital use a treatment program more commonly used to treat cervical cancer. Since vulvar cancer is so rare and understudied, they can only guess how Mrs. Newland will react.

The rarity of her cancer is also the reason why it took doctors so long to diagnose her.

“They pretty much ruled out everything else before we approached cancer as an option because they thought all of those things made more sense than being cancer,” Ms Newland said.

What started as a dull ache in November gradually evolved into a more throbbing lingering pain in her vulva.

“I felt like something was wrong,” Ms Newland said.

It wasn’t until January, when the pain became unbearable and her family rushed her to the emergency room, that a biopsy revealed the life-changing news.

Vulvar cancer is not common – every year in Australia only around 420 women are diagnosed with vulvar cancer, according to the Cancer Council.

It most commonly affects postmenopausal women, but in recent years rates of vulvar cancer in women under 60 have increased.

Doctors discovered that the cancer had spread through her lymph nodes and so the decision to undertake pelvic radiotherapy was made.

“My ovaries were in the line of fire,” Ms Newland said.

She and Mr. Barville then had to make a decision that most people their age wouldn’t normally consider – if they wanted children.

“It was very confronting because it’s not the kind of deep conversation you have at that age,” Ms Newland said.

In contrast, the cost of chemotherapy and immunotherapy treatments are not yet covered by Medicare due to the rare nature of vulvar cancer.

A friend of the Newland family set up a GoFundMe to raise money to cover Ms Newland’s medical bills. Already more than $57,000 has been raised.

The words of support shared on the fundraising page show how much she is truly loved.

“You don’t meet many 24-year-olds as kind, caring, caring and generous as Kayla,” Jackie Norman wrote on Facebook,

“Kayla has always helped raise money for charity since we’ve known her, such a beautiful, caring soul,” Billie Gleadow said.

“He is one of the most loving, caring and generous people I know, who would do anything to help others,” Sophie Binning said.

At just 24, Ms Newland appears unwaveringly calm and optimistic about an uphill battle ahead.

September is Gynecological Cancer Awareness Month and she hopes her story can encourage young women to seek help if they are suffering.

“I would say you know your body best, so don’t take no for an answer,” she said.

“Even though you are young, unfortunately you are not bulletproof.”

Originally published as “You know your body”: the bride fights a rare cancer