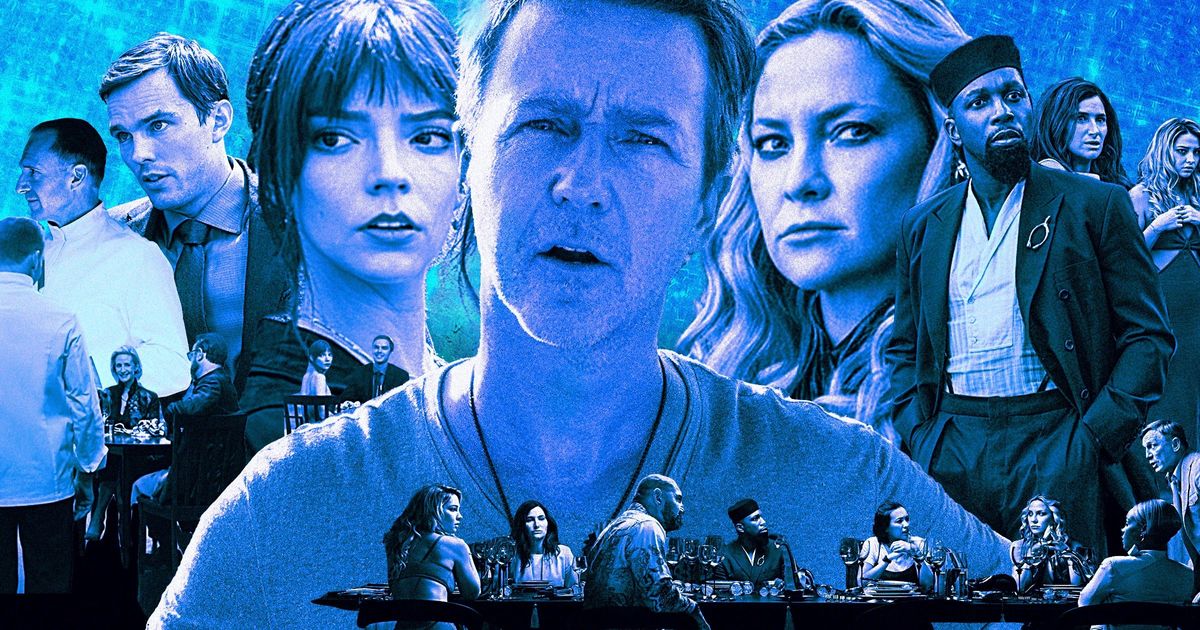 We’ve reached a delicate point in pop culture when roasting the rich on screen, or even just attaching the “lewd” descriptor to this elite segment of the population, is seen as a satisfying enough rebuke of corrupt capitalism that favors white people above all. . Throw in some goofy murder, a top-notch cast, and dry humor and you might even have a blockbuster.

That was certainly the feeling after attending the world premieres of “Glass Onion: A Knives Out Mystery” and “The Menu” last week at the Toronto International Film Festival.

“Glass Onion” is director Rian Johnson’s latest film in his beloved series, this time centering on a group of wealthy, aloof people reunited in a mansion in Greece. “The Menu” is director Mark Mylod’s latest set at an ultra-pretentious upscale restaurant that has attracted the rich and privileged.

Just moments after the lights went out in each theater screening, you could hear the audience laughing uproariously during all the appropriate scenes.

That includes in “Glass Onion” when a certain multi-millionaire (Edward Norton) announces he has a fancy car right inside his mansion because, you know, they’re on an island and there’s nowhere. somewhere to really drive.

Or when a guy who’s famous to be famous (Kate Hudson) dismisses any real concerns about throwing a haphazard-filled party at her house during a pandemic. “They’re in my pod,” she said.

That same kind of audience engagement is true for “The Menu,” especially when one foodie (Nicholas Hoult) gets almost completely excited over a plate of breadless bread. Or when a table of finance bros (Rob Yang, Arturo Castro and Mark St. Cyr) try to use their power to demand bigger meals and are brutally rebuffed by an enigmatic culinary tyrant (Hong Chau).

And for what it’s worth, “Glass Onion” and “The Menu” are wickedly entertaining. It’s the kind of fun, sometimes edge-of-your-seat movies that are definitely worth paying for overpriced popcorn and candy at the theater. There’s even a tasty excitement that comes from the expectation that these wealthy characters will surely get some sort of reward.

But as superior eaters of the rich movies have shown us, we should also understand — and perhaps even correctly hate — the landscape that sustained them in the first place. And why these characters’ foils (played by Janelle Monáe and Anya Taylor-Joy in “Glass Onion” and “The Menu,” respectively) sound more like stand-ins for audiences without a voice of their own.

It’s a shame. Because when done right, rich eater movies can be thrilling to watch and offer thoughtful commentary as they castigate the rich for the despicable ways in which they have thrived under capitalism and show the unscrupulous ways in which the poor feel compelled to react .

For example, movies like “The Purge” and “Parasite” challenge the moral compasses of the people who live inside the two ends of those stories just as much as they do their audiences. Others like “Hustlers‘ and ‘Ready or Not’ leave little room for debate because they place us in the armchairs of those who have been touched by greed and opulence.

So we encourage them to wipe the floor with the blood of the well-to-do, or at the very least empty their bank accounts. Because we are there with them.

The problem with “Glass Onion” and “The Menu” is that they have no point of view. Of course, you could project themes onto the material, but that would be pure projection. Like the idea that Andi (Monáe), the only black woman among a group of wealthy assholes – who is successful in her own right – might have a bigger reason to want to burn the whole system down or even commit homicide.

Or the idea that the wealthy guests in “The Menu” represent the people who do dirt in their daily lives but feel they deserve to indulge themselves with pompous food that they simply don’t even like for to be able to say that they have experienced something that others can I do not even dream. And how that horror makes him easy prey for a boss (Ralph Fiennes) with his own vengeful agenda.

But none of this is straightforward in the story, even though there are multiple possibilities for exposition. It’s just a viewer applying their own worldview to an otherwise hollow, albeit deliciously demented, big-screen narrative.

In other words, trying to give “The Menu” and “Glass Onion” more weight than the filmmakers obviously ever intended. This may be due to their own experience of class and race in a system that favors wealthy white men by default. Can you incisively eat the rich if you don’t really know what it entails – or what the systemic motives might be?

Put more bluntly: would either of these directors be interested in making a movie about the rich that could also end with them on a plate?

Only time can tell. Johnson certainly came close to that with the 2019 original “Knives Out,” which confuses the rich through the role of an immigrant nurse. And to his credit, Mylod has helmed episodes of “Succession,” which doesn’t exactly devour the rich, but definitely paints an ugly picture of them.

But “Glass Onion” and “The Menu” don’t give us anything to chew on. It’s the type of entertainment that can be retold over and over again, largely because it’s unchallenging and safe. It’s easy to point fingers and laugh at the rich, or feel a sense of vindication when they’re successfully digested in movies. But you always leave hungry.

Netflix’s “The Menu” and “Glass Onion: A Knives Out Mystery” premiered at the 2022 Toronto Film Festival and will be released November 1. 18 and Dec. 23, respectively.