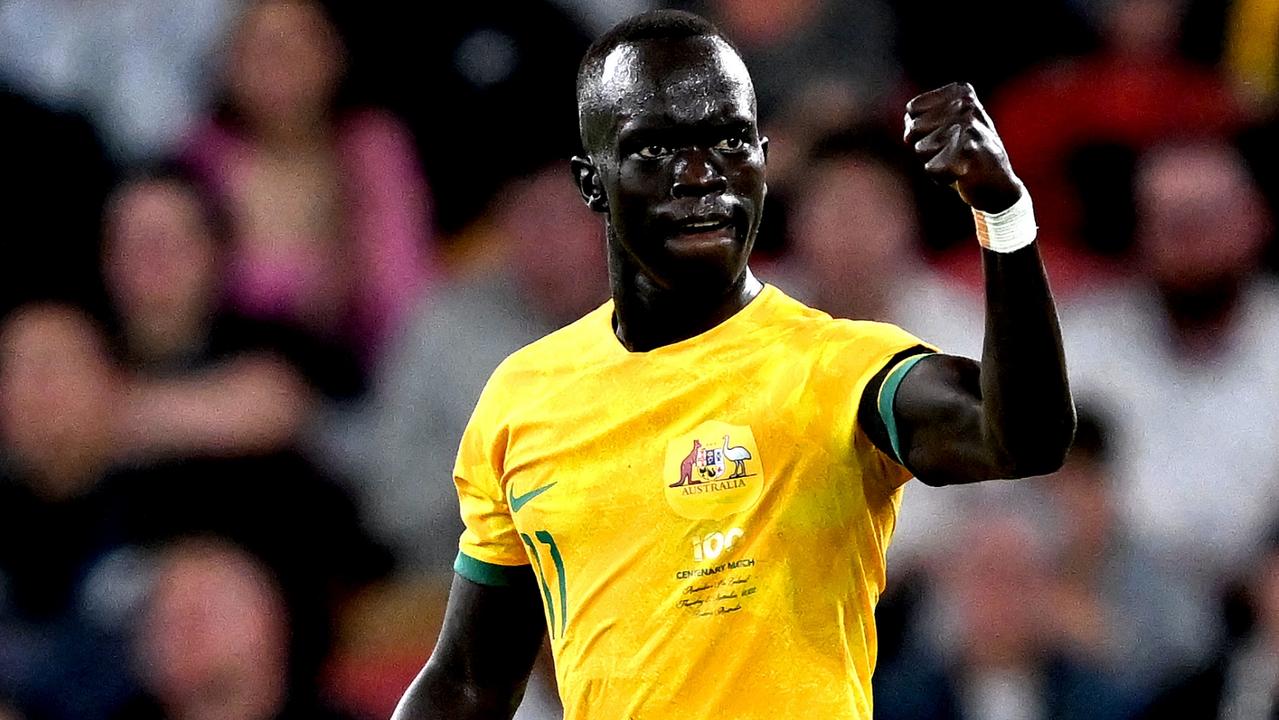 Awer Mabil came to the party with a scorching strike to ensure the Socceroos 100 year celebrations didn’t fall completely flat at Suncorp Stadium on Thursday night.

Mabil scored in a Socceroos shirt for the first time on Australian soil to secure the hosts a 1-0 victory against New Zealand.

His 32nd-minute long-range shot was the highlight of a lackluster contest played in front of 25,392 fans who would have expected more from a Socceroos team playing against the 103rd-ranked nation in the world,

In the Socceroos’ first game since their heroic success in the World Cup qualifiers in June, their rust was evident, and against better opposition they should have paid for their sloppy play.

Socceroos manager Graham Arnold was disappointed that his side were “losing the physical battle”.

“But overall I changed the way we play,” Arnold said.

“I wanted them to play man to man all over the park to get that physical battle, but I thought we should have scored a few more goals.”

Arnold will demand an improved performance – regardless of which 11 players start the game – in Sunday’s second game of the series in Auckland, where the New Zealanders will undoubtedly rise above their home fans.

Arnold made five changes to the squad on Thursday night which began in June’s playoff success in Qatar against Peru.

The Socceroos got off to a shaky start, with defender Trent Sainsbury giving the visitors possession in the opening two minutes with a misdirected pass,

Sainsbury’s poor start continued in the 14th minute when he was passed by Andre de Jong, who then failed to complete his good work when he fired wide of the post with only Ryan to beat .

The Socceroos set up late and should have taken the lead in the 17th minute thanks to midfielder Jackson Irvine failing to hit the target from close range,

However, Irvine had to redeem himself 15 minutes later when he gained possession in midfield before feeding Mabil, who clipped the inside of the right foot before unleashing a 20-yard strike that found the bottom corner fillet.

While the shot hit with power and placement, New Zealand keeper Oli Sail would have been disappointed to be beaten from long range.

While both teams had chances in the first half, the second half didn’t yield much.

Substitute Leckie had a chance to double Australia’s lead in the closing stages but Sail produced a magnificent save to ensure the Socceroos would have to settle for a narrow victory as they bid farewell to the Aussie fans before the World Cup from November 20 to December 18.

“Some of the football tonight was outstanding,” Hay said.

“We dominated for long periods…but that’s part of our evolution.

“We have to become clinical in the final third.”