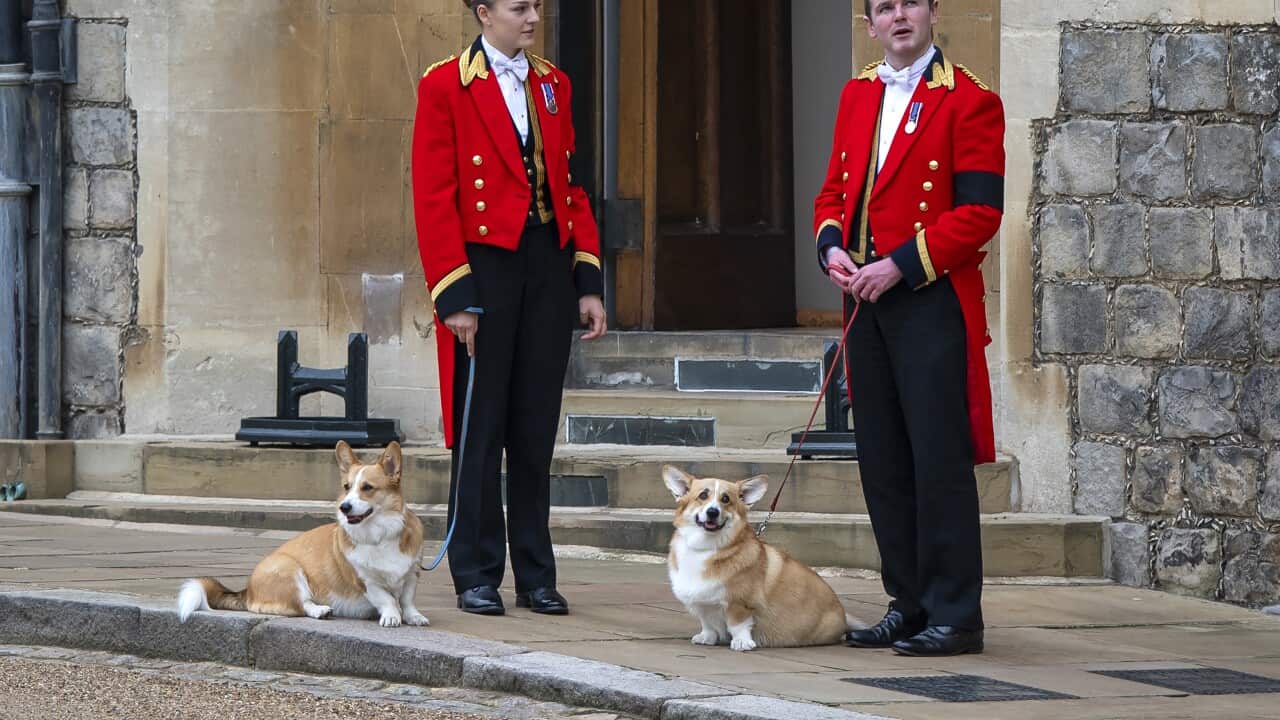 Global
The Queen’s corgis and one of her favorite ponies played a poignant role in the final farewell to their devoted owner.
The carefully groomed young dogs – Muick and Sandy – one on a red leash and the other in blue – were brought into the quadrangle of Windsor Castle for the arrival of the Queen’s coffin ahead of her incarceration at St George’s Chapel .

Emma the Fell Pony, owned by the Queen for 26 years, stood on the grass at the edge of the long walk, approaching the castle.

It was a moving sight as the lone horse stood in a space between the hundreds of thousands of floral tributes entrusted to the care of the Queen’s trusted groom and manager of Windsor Castle, Terry Pendry.
Mr. Pendry, in bowler hat, black jacket and riding boots, bowed his head as the coffin passed.

Behind them were grooms from the Royal Mews of Windsor wearing black armbands in mourning.

The black pony’s ears twitched and she waggled her tail, stomping the ground twice with one of her front hooves as her owner’s coffin passed through the state hearse with a military parade.

Mr Pendry once described Emma as “Her Majesty’s wonderful servant” and one of his favorite horses.

Elizabeth II was famous for her affection for her dogs and horses, as well as her passion for horse racing and thoroughbred breeding.

Muick and Sandy were in charge of two royal pages, in red frock coats, on Monday and the couple took the time to pet the dogs as one of the animals lay with its head on the ground.
The queen owned over 30 corgis in her lifetime.
Many of her corgis were direct descendants of Susan, who was given to her as an 18-year-old gift by her parents in 1944.

The Queen had fallen in love with her father George VI’s dog, Dookie, a Pembrokeshire corgi, and wanted one of her own.

Prince Andrew, Duke of York strokes royal corgis as they await the coffin of Queen Elizabeth II as he travels to Windsor Castle for the engagement service at St George’s Chapel on September 19, 2022 in Windsor, England. Source: Getty / (Photo by Peter Nicholls-WPA Pool/Getty Images)

Susan was so loved that she accompanied Princess Elizabeth on her honeymoon.

In 2021, the Queen received two new puppies, a Dorgi and a Corgi, as gifts from Prince Andrew while locked up in Windsor.
The puppies entertained the delighted monarch while the Duke of Edinburgh was in hospital and at Buckingham Palace and the Royal Family dealt with the bitter fallout from the Sussexes’ Oprah interview.

The Queen named the dog Fergus after his uncle who was killed in action in the First World War, and the corgi Muick, pronounced Mick, after Loch Muick on the Balmoral estate.

But the monarch was devastated when five-month-old Fergus died a few weeks later following the death of Philip.
He was later replaced with a new corgi pup, from Andrew and Princesses Beatrice and Eugenie for his official 95th birthday, which the Queen named Sandy.
The puppies have been a constant source of joy for the monarch during the lockdown, said her hairstylist Angela Kelly.

Muick and Sandy have now been relocated with Andrew.