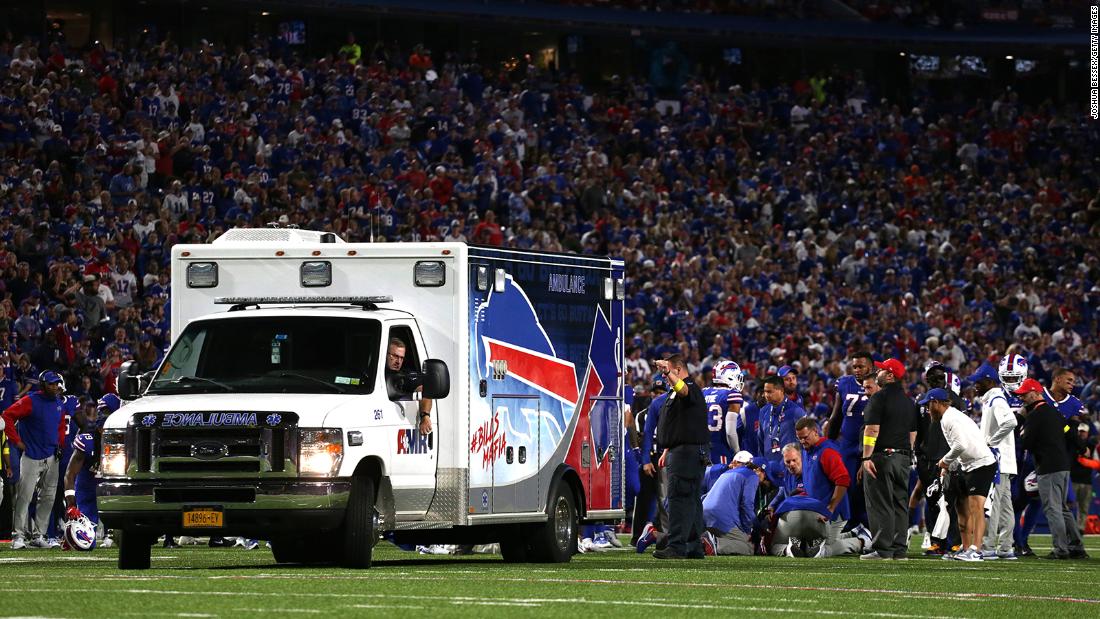 Bills cornerback Dane Jackson was taken to hospital in an ambulance after sustaining a neck injury in a collision with a teammate late in the first half.

Jackson’s neck bent awkwardly back after colliding with Tremaine Edmunds in a tackle late in the first half. He was placed on a stretcher before being loaded into an ambulance and taken to hospital.

In a statement, the Bills said Jackson was “taken to ECMC (hospital) for evaluation of a neck injury” where he would undergo a CT scan and X-ray. The team also said he had “full movement in the extremities”.

On Tuesday morning, Buffalo announced that Jackson had been released from the hospital and was undergoing further evaluation. The Bills said “there was no major neck or spinal cord injury.”

Jackson’s injury was one of the few negatives to what was an extremely successful Monday night for the Bills as they beat the Titans.

Quarterback Josh Allen threw for 317 yards and four touchdowns — including three to Stefon Diggs and one to Reggie Gilliam — as he dissected the Titans.

On the other side of the ball, the Bills defense managed to stifle Ryan Tannehill, Derrick Henry and the Titans offense.

Although Henry was able to score an opening touchdown, the 2020 Offensive Player of the Year wasn’t able to really get going against a strong running defense.

Matt Milano and Jordan Poyer both intercepted Tannehill – Milano running his back 43 yards for a touchdown – as Buffalo forced four turnovers to keep his foot on the pedal.

Such was the level of dominance, both teams introduced their backup quarterbacks late in the game to avoid injuring their starters.

The connection between Allen and Diggs proved crucial in the Bills’ rise to the top as many people’s Super Bowl favorites, with Diggs finishing Monday night with 12 receptions for 148 yards and all three touchdowns.

After a dynamic game in the season-opening win over the Los Angeles Rams last week, Diggs became the first NFL player since Steve Smith in 2007 with at least 250 receiving yards and four receiving touchdowns. in his team’s first two games of a season.

And Allen – who leads the NFL with eight touchdowns after two weeks – said he loved playing with such a talented receiver.

“It felt good to get the ball to him early and often. He did a great job opening up, making plays, making great catches,” Allen said. said after the game.

“He is what he is: he’s Stefon Diggs. We know he’s one of the greatest, if not the greatest, receiver in the game right now. I trust him implicitly.”

The Bills are now 2-0 and still among the favorites to challenge for a Super Bowl berth while the Titans – who were the No. 1. 1 seed in the AFC conference of the year last – remains without a win.