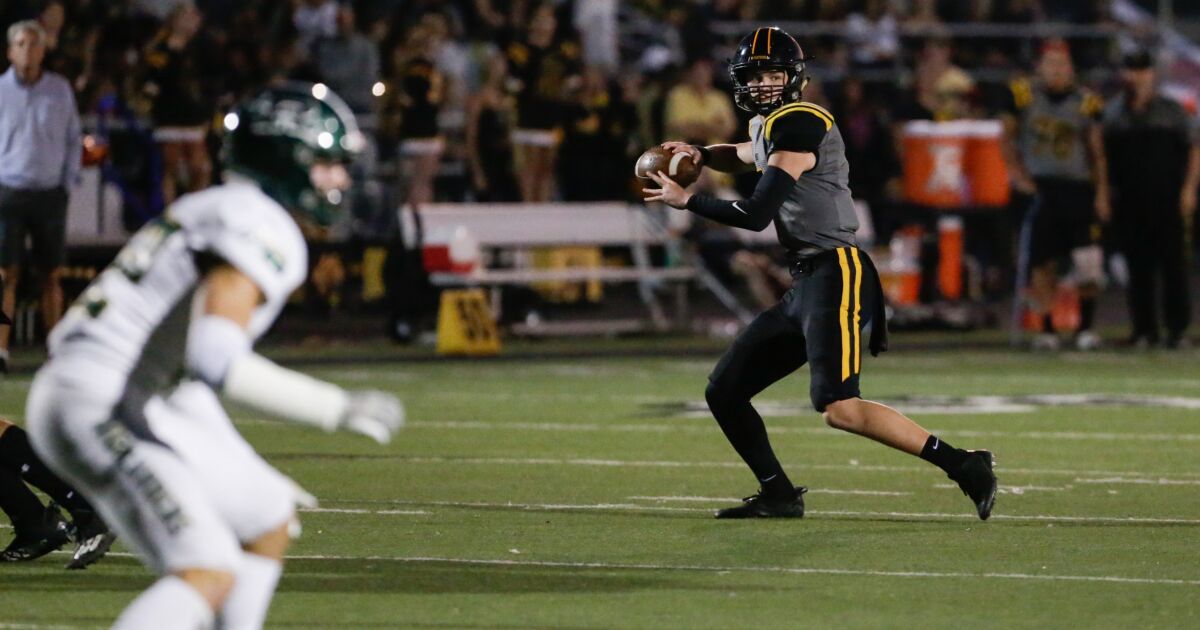 It’s mid-season in high school football, which means it’s time to reveal which players have met or exceeded expectations.

Since linemen rarely get attention unless their numbers are mentioned for a holding penalty, let’s start by singling out the Huntington Beach Edison duo of Makai Sagiao and Nathan Gates for their blocking contributions in helping lead. the Chargers to a 5-0 record.

Gates, who is 6-foot-5 and 275 pounds, received numerous pre-season accolades. Sagiao, a 6-foot-2, 297-pound junior transfer from Newport Harbor, was so anonymous he wasn’t even on Edison’s MaxPreps list this week.

He started his first two years at Newport Harbor and played every line position at Edison, although offensive guard was his primary position.

“He raised the level of our game on every level,” line coach Kody Afusia said of Sagiao.

His agility made him an effective shooter. Going full steam ahead, he handles the defensive ends on running plays and loves his job.

Santa Ana Mater Dei’s Elijah Brown is 22-0 as a starter over the past three seasons and is completing 70% of his passes with 15 touchdowns and two interceptions in five games.

Anaheim Canyon’s Christian Lundsberg has 23 touchdowns with just one interception.

Newbury Park freshman Brady Smigiel led his team to a 5-0 record in passing for 1,356 yards and 19 touchdowns with two interceptions while completing 69% of his passes.

Ventura St. Bonaventure’s Delon Thompson has been in tears since Game 1. In five games, he rushed for 1,271 yards and 14 touchdowns, averaging 9.0 yards per carry.

Bellflower’s Trey Pinkney benefited from the double wing, helping lead the team to a 5-0 record with 756 rushing yards and eight touchdowns.

Makai Lemon of Los Alamitos is a one-man wrecking crew. His speed and elusiveness force opponents to dedicate extra resources to cover him. He is still producing.

Reseda Cleveland’s Kory Hall was one of the best players in the City Division with seven touchdowns. He averages better than 30 yards per catch.

LA Cathedral’s Xavier Jordan had 27 catches for 693 yards and 10 touchdowns against quality competition.

San Pedro’s Nick Fernandez is the best two-way player in the City section at tight end and defensive end. It thrives in the trenches.

Chase Martin of Thousand Oaks has been a tackle machine for the 4-0 Lancers.

Gardena Serra’s Rodrick Pleasant used his speed and instinct to be the best of the best at cornerback.

Long Beach Poly’s Daylen Austin is a badass who can cover anyone.

Orange Lutheran’s Dieter Kelly had all of his 14 conversion kicks and five of seven field goal attempts while averaging nearly 40 punt yards.

Chaminade’s Ryon Sayeri blasted kickoffs in the end zone for touchbacks, had a field goal winner, was three-for-four on field goal attempts and averaged over 50 punt yards.

Kristian Johnson of Redlands Citrus Valley is five for five on field goals.