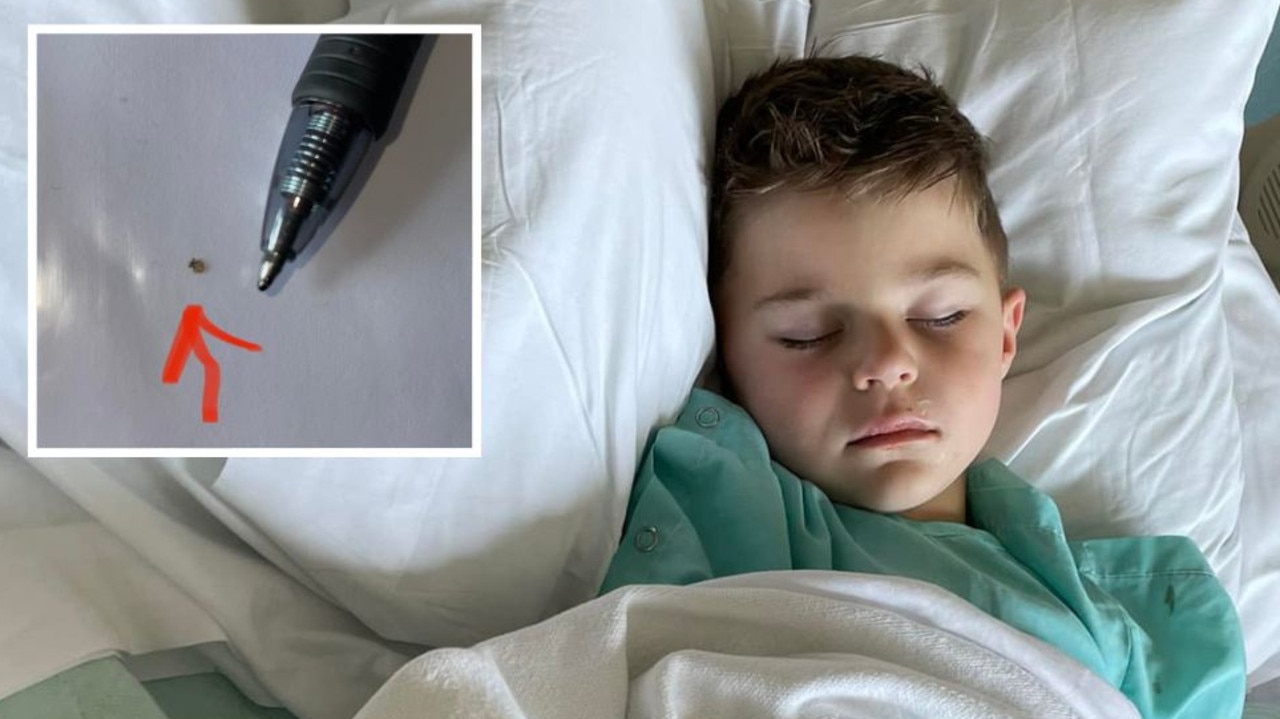 That’s all it took to transmit a rare, dangerous and debilitating tick-borne disease that seriously sickened an energetic, spirited and generally healthy three-year-old American boy.

Jamie Simoson’s maternal intuition prompted her to seek additional medical treatment for something her youngest son’s pediatrician assured her was a virus that needed to run its course, the New York Post reports.

However, it was something she later learned that required weeks of medical attention and carried the possibility of lifelong effects.

Jonny Simoson, from Pennsylvania, was swimming in a neighbor’s pool on June 15 when his mother noticed a small spot on his right shoulder blade. It was a tick smaller than a pen tip.

“It wasn’t integrated. It wasn’t engorged. I easily pulled it out with tweezers and it was still alive,” Ms. Simoson said. “He didn’t necessarily have any marks on his shoulder. back until a few days later – there was just a small red bump. That was it.”

“He was sad, had no appetite and complaining of a headache was not normal for a three-year-old,” Ms Simoson said.

Just that morning, his mother said he ate breakfast, played with water guns, and had the best time of his life.

Her symptoms worsened over the next two days. After a visit to the pediatrician, Johnny was sent home with supportive medication. I woke up that night with a fever.

“We called the doctor the next morning, and I said he slept a lot and that was really not his style,” Ms Simoson said.

After a second visit to the doctor, she took her son to the emergency room as his fever soared above 104 degrees (40C). He also showed no reaction to a Tylenol suppository, which was abnormal for a typically rambunctious boy.

Days in the hospital turned into weeks. The high white blood cell count rose to 30,000. He was unusually sleepy and showed no signs of waking up from intravenous fluids.

A lumbar puncture revealed he had an increased number of neutrophils – a type of white blood cell that acts as the immune system’s first responders – in his umbilical fluid. He was treated for bacterial and viral meningitis until doctors ruled them out.

Johnny was transferred to a specialist children’s hospital, where he spent four days in the pediatric intensive care unit undergoing a coronary scan to rule out bleeding in the brain, abscess or mass. All of these have been discarded.

“Things got really scary at that point,” Ms Simoson said. “It was so frustrating looking for an answer. We were terrified of not going home with our child.

However, after an MRI, neurologists were able to diagnose him with meningoencephalitis – an infection of the brain and the thin tissue around it. After an overnight of intravenous immunoglobulin, a treatment for patients with antibody deficiencies, there were signs of hope.

Mrs. Simoson thinks IVIG has made all the difference for her son.

“Within 15 hours of her first dose, I heard ‘Mom, is that pepperoni pizza?'” she recalled.

In reality, it was simply a tissue box. To Johnny, however, it looked like a pizza box, and that’s all the kid wanted – a piece of pie.

“So we started asking him questions to try to assess his cognitive ability at this point,” Ms Simoson said.

After almost five full days of being unresponsive, her son was alert and talking.

“It was amazing. It was the first time since the whole situation started that my husband and I had completely broken down,” she said confidently, finally knowing that their baby boy would soon be home. home.

There was light at the end of the tunnel for Johnny, but the toll of isolation was devastating.

“Isolation is hard for a toddler,” Ms Simoson said. “He started having a delirium in intensive care and by the time he was released from solitary he didn’t want to go back into the room.”

Her parents had to re-teach her how to eat and drink, as well as how to sit and speak clearly.

“We had discussed inpatient rehabilitation with PT/OT, but found that the paperwork would delay our discharge for up to three more days,” Ms. Simoson said.

They agreed that it was acceptable to take him home and seek outpatient services.

“We knew coming home was going to be tough,” Ms Simoson said. “He’s active and doesn’t understand his limitations. We were so excited to get out of the hospital, but so scared afterwards.

After 12 days, Johnny was finally released.

“Johnny still wasn’t walking and his balance was poor,” Ms Simoson said. “We knew we had a ton of work to do, but we were up for the challenge.”

According to the Centers for Disease Control and Prevention, human infections with the Powassan virus have been found in the United States, Canada and Russia.

In the United States, cases of Powassan have been reported primarily in northeastern states and the Great Lakes region. These cases mainly occur in late spring, early summer and mid-autumn, when ticks are most active.

There have only been 178 reported cases in the United States since 2011.

Ms Simoson said her son was recovering but still had noticeable left-sided impairments. She started a Facebook page, so others can follow her journey.

“He seems to have regressed a bit cognitively, but we’re optimistic that his resilience will see him through it,” she said.

Ms Simoson is now urging others to prevent tick bites and stand up for their children.

“Only you know them and know what’s normal for them, and if you’re not feeling well, stand up for them,” she said. “Don’t feel like you’re interrogating anyone. That’s your job.”

Ms Simoson is also urging people to donate blood. Her son received five doses of IVIG, a blood product, during his hospital stay. With each dose, she said doctors saw consistent improvements.

“We’re confident it can’t be proven, but we know deep down that IVIG was the turning point for Johnny, and if there’s anything we can do to help someone else get that treatment fast, it’s That’s really our goal,” she said.