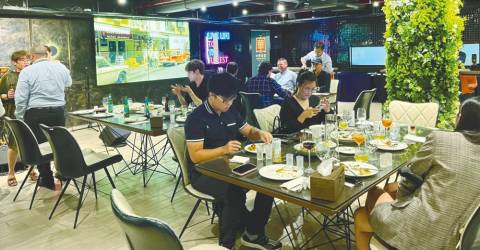 where On September 9, Luen Heng F&B Sdn Bhd, a company which imports and supplies alcohol and soft drinks, launched a new alcoholic beverage, Musang King Durian Liquer, at a media appreciation party during the Mid-Autumn Festival.

The business, which started as a small family shop on Petaling Street and was later transformed into a reputable company by its managing director, Datuk Kenneth Soh, also celebrated a new title bestowed upon it.

They use the latest technology and skill to derive premium flesh from the Musang King Durian to create a smooth, elegant and full-bodied liquor with a sweet aftertaste.

Mujestic is a world-class liqueur, widely recognized as a premium fruit wine, and is a new alternative approach to wine enjoyment.

On the same evening, Luen Heng celebrated Datuk Kenneth Soh, who was inducted into “Commanderie Du Bontemps Du Médoc” at Chateau Malescasse, France on May 18 this year.

La Commanderie brings together the main players in the Bordeaux trade, winegrowers, brokers and merchants.

The initiatives of the Commanderie, Grand Conseil de Bordeaux, were created to federate wine within the Bordeaux region and to maintain relations with the Commanderies of Bordeaux located all over the world.

Each year, the Commanderie du Bontemps welcomes a large number of new Commanderies d’Honneur into its ranks.

They must be sponsored by one or two confirmed commanders, and after the investiture ceremony, they become active ambassadors for Médoc, Graves, Sauternes and Barsac wines.

The evening began with a speech from Soh about how his father started his business as a conventional tobacco, grocery store and later wholesaler, before moving into alcohol in the 1960s and 1970s.

He talked about growing up in Jalan Bandar, his experiences and taking over the business, which he later turned into a successful beverage business.

Members of the media enjoyed a delicious Chinese dinner and drinks, including durian liquor, and were entertained with a performance by local singer Z Yan, and the enjoyable evening ended on a happy note!